Hello beautiful world, I’m proud to announce the new “Modular/Portable Structures” page at Vertecology. So far, there’s but one modular/portable, the venerable 10-foot geodesic sphere or “Geo” but as the months wear on that will change; much is in the works.

The Geo has been a great start, a 10-foot diameter beauty that I designed last year and built with the help of David Nelson Rose of Moda Graphik – you can see the stream of ever improving photo albums on Facebook as well as some of the best shots on the new page. The Geo has since been showcased at some of LA’s most legendary venues, including the Avalon in Hollywood, the Vanguard in Hollywood, the downtown Artwalk and Topanga’s Moonfire Temple, and the geo’s journey has just begun. 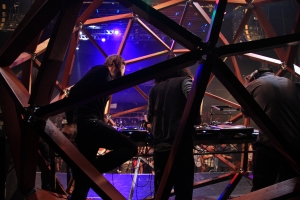 The Urban Circuitry DJ Battle in the Geo at Avalon in Hollywood, June 2011

We’re working with Lumen Nature to offer re-arrangeable sequenced LED lighting as part of the package (this will be available within a couple of weeks). We’re also in design discussions with the engineers at Kicker Audio to develop a 3,000 watt sound system that fits cleanly into the structure. 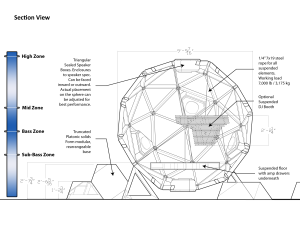 So I’m excited about the new page; it’s going to bring in new clients, and more than just a revenue stream. I’m looking forward to that of course, and to the fact that that’s going to create the bandwidth to do some really interesting experiments in the design/build and permaculture realms, not to mention pay some of those pesky bills that don’t know when to disappear.

And the new page is going to mean a more diverse set of clients with some interesting design problems for sure, which will mean in its own right some great opportunities to test just how versatile the Geo can be. Can it be the villain’s cockpit in the next Marvel thriller? Can it become a 3D whiteboard? A butterfly attractor that brings these pollinators into the neighborhood and blows up gardens for miles around (click the link, these creatures are quite amazing actually) Or maybe just a giant swing? And what about moveable modular living walls? Stay tuned.

Finally, ten percent of all profit from structure rentals will go to food forestry projects and programs such as City Repair; this will help fund the solutionary revolution, as well as enable Vertecology to build partnership with the people making it happen, and maybe, just maybe, make some of those bills disappear for a whole lot of us, for real.

Check out the page by clicking the “Modular Portable Structures” tab at Vertecology.com and of course spread the word far and wide. Thanks again.