A few weeks ago I was out at the Ashland Food Coop doing the political campaign work I’ve been doing to make ends meet while continuing work on Vertecology’s evil plan to take over the world with edible vines and up walked Janet Marley of Bahkti Fest fame. The net result of our conversation can be seen in the photos below… 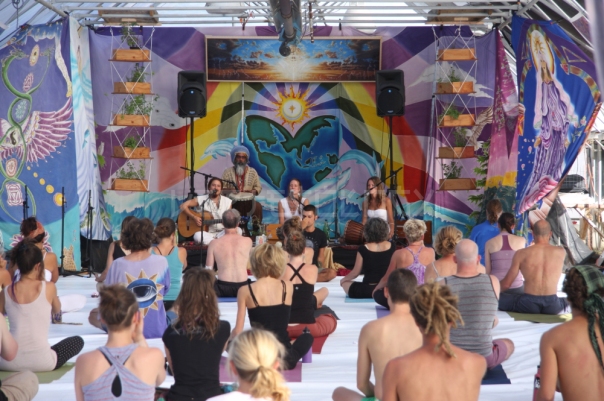 Oregon’s got a set of Hanging Gardens, a lovely pair that made an appearance at the first annual and very successful PranaFest at Ashland’s Jackson Wellsprings a couple of weeks ago. While a few hundred of us did our yoga poses under the guidance of a dozen or so of some of the best yoga instructors around, these twins struck a pose on stage and got star treatment all around. Thanks again to Janet for producing this great event, festival producers are like rock stars in my world; thanks to all the rest who made it happen behind the scenes and thanks to the thousand people who came out to play.

And stay tuned… there is method to my madness and Vertecology is going to the bees! That will make sense in a very short while, I promise!